Sailing The Whitsundays With Elise Cook

If you haven’t heard the name Elise Cook by now, it’s time you did. Elise is part of a new wave of Australian explorers, devotees of the simple life, choosing to experience the natural wonders of Australia over more expensive overseas travel.

Van lifers, as they are referred to colloquially (and on Instagram), live on the road, connecting with the great outdoors and other van lifers, sharing their stories, struggles and philosophies.

Earlier this year, Elise surprised her husband Dom for their fifth wedding anniversary with a weeks sailing around the Whitsundays with Queensland Yacht Charters and recorded their adventures on her Wandering Home Blog.

Dom and Elise have been living full time in their Kombi van since 2017, visiting some of Australia’s most idyllic landscapes. According to Elise, Dom loves the open water and has often talked about buying a dinghy to tow behind them. What better anniversary gift then than a weeks sailing adventure around the Whitsundays?  They had some challenges along the way  – a van breakdown 30 minutes before they were due to arrive at the airport – but it’s fair to say Dom was more than pleasantly surprised to be standing in front of Banjo, our luxurious sailing catamaran.  And the biggest surprise of all?

“Once he got his head around the fact that we were going to sleep on the yacht, it took a LOT of convincing that there would be no crew or skipper joining us, that he would be the captain, and that we would be spending a week on Banjo, sailing around the Whitsunday Islands, just the two of us.”

That’s right, no boat licence is required to drive a yacht in the Whitsundays, but an in-depth briefing certainly is.

“Frank, a seasoned sailor, came on board and spent a couple of hours teaching us everything we needed to know – how to read the map and tide times, how to radio in twice a day with updates and to check the weather, safe places to anchor depending on the weather, how to anchor – something that definitely requires teamwork – and how to drive the yacht!” 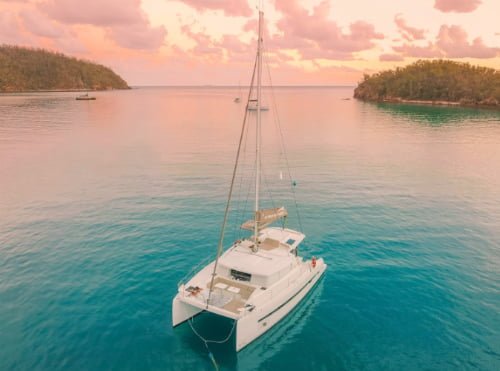 From Van Life To Yacht Life

Elise and Dom’s Whitsunday sailing adventure saw them island hopping, paddle boarding, swimming, snorkelling, dancing and sleeping under the stars. Wine and delicious platters and spreads from Pear and Peach Catering also featured prominently! A lack of phone reception only enhanced the experience:

“The fact that you can have this incredible adventure, in one of the most beautiful locations in the world, immersed in nature, unplugged and away from everything, with an element of learning and having to work at something as a team – it’s pretty special.”

Their Whitsundays sailing experience so impressed the couple, Dom is looking into getting his boat licence. They’ve even talked about travelling by boat instead of van one day!
Read the full account of Elise and Dom’s Whitsunday sailing adventure, or if you would like any more information about Whitsunday sailing itineraries, or the vessel Elise and Dom sailed on, please don’t hesitate to contact our reservations team.